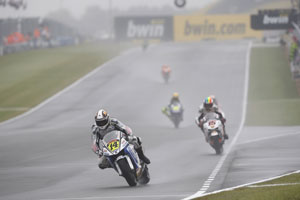 Donington Park will be replaced by Silverstone

The British round of the MotoGP World Championship looks likely to be run at Silverstone from 2010 onwards according to the guys at Visordown. The news comes after it was confirmed that Formula One is going to race at Donington Park in 2010, with the circuit undergoing major upgrades (costing over $200 million!) to welcome the F1 circus.

Donington has long been a popular round for fans around the world with its undulating and twisting nature often providing good racing, although it’s always been terribly slippery in wet weather conditions.

If it is confirmed that Silverstone will be taking over, it will be interesting to see if it can live up to the excitement that Donington always gave the British GP.

There’s still been no news on Kawasaki’s departure from MotoGP since they officially announced they were leaving the premier class, although most remain positive that the ZX-RRs will be on the grid via a privateer outfit. We shall wait and see. Dorna boss Carmelo Ezpeleta is confident they will be on the grid, so that’s a good sign for now.

Australian Superbike
2003 Australian Superbike Champion Craig Coxhell will ride a privateer Honda CBR1000RR in the new look ASBK series this year, joining forces with Jeffrey Honda and G.A.S Racing for his assault on this year’s title. Coxhell will be one to watch on the Blade and is sure to gel with the bike from the get go. His first test will be at Winton next week alongside the rest of Honda’s supported riders.

In other ASBK news, the series’ Supplementary Regulations have been released on the official website at www.asbk.com.au, so download them and get your entries in if you’re planning to contest the series.

We’ll list a rundown of the factory teams set to participate in the series this week. 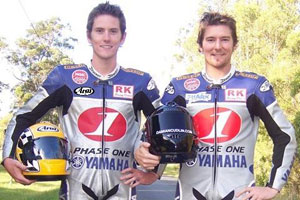 The Cudlins are teamed up with Phase One

Stop press…an email just arrived announcing that Damian Cudlin will be joined by younger brother Alex at Phase One Yamaha this year, marking an all-Aussie (and brotherly) assault on the championship. Both are long time WEC specialists and are sure to rise to the occasion as they are paired together for the first ever time this year.

Check out www.alexcudlin.com or www.damiancudlin.com for more details on the exciting news.

American Supercross
The second round of the Monster Energy AMA Supercross, an FIM World Championship, series took place at Phoenix on Saturday night, where L&M Yamaha’s James Stewart took his first win of the series after his disappointing DNF at Anaheim one week earlier.

But Stewart didn’t have it all his own way as Australia’s defending champion Chad Reed finished just 0.591 seconds behind on his Rockstar Makita Suzuki. The pair went at it for 20 laps, and Reedy looks up to the challenge more than ever this year.

Rounding out the Supercross class podium was last week’s winner Josh Grant (JGR Yamaha), and he maintains his points lead heading into round three.

Dan McCoy (Moto Concepts Honda) crashed in his heat and injured his hand bad enough that he couldn’t take part in the LCQ. New Zealander Cody Cooper injured his leg in practice, forcing him out of action for the night.

The Lites class was won by championship favourite Ryan Dungey (Rockstar Makita Suzuki) in his first ride wearing Fox apparel, while arch rival Jason Lawrence didn’t make the main event. Second on the night was Justin Brayton (KTM) ahead of Ryan Morais (Monster Pro Circuit Kawasaki). His teammate, and last week’s winner, Jake Weimer was fourth after crashing out of the lead. Aussie Dan Reardon was 10th after an action packed Lites main. 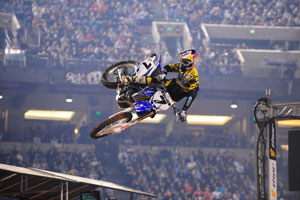 Stewart bounced back at A2

Australian Motocross/Supercross
Team line ups for the Australian Motocross and Supercross series are beginning to be announced, with Woodstock Honda Thor Racing selecting a youthful range of riders with Ford Dale and Todd Waters in Pro Open, while Peter Boyle will race selected events that don’t clash with his off-road commitments.

The Pro Lites rider on the team will again be Dean Ferris, while Rebecca Lipsett will race in the Women’s class for the factory Honda team.

Kawasaki has officially announced that Craig Anderson will be on the KX450F for 2009, joining Luke George and Luke Arbon on Team Green. Arbon will race the Under 19s in the motocross series and the Pro Lites in Super X.

Here’s a quick rundown of what the teams will likely look like in 2009 according to our local industry sources:

Australian Speedway
Leigh Adams sealed his 10th Australian Solo Speedway Championship at Gillman in South Australia on 10 January, taking yet another clean sweep of the three round series to make it 18 victories from 18 starts for the series. Former champion Chris Holder finished the series in second, and Rory Schlein was third.

Adams will return to Europe once again this year to contest the World Speedway GP series.

Dakar Rally
Spaniard Marc Coma (KTM) continues to lead the Dakar Rally after eight stages (Saturday was a rest period), ahead of David Fretigne (Yamaha) and Cyril Despres (KTM). The seventh stage was taken out by Francisco Lopez as the race arrived in Chile, before Despres claimed stage eight to further climb the ladder. Australian Dave Schwarz (KTM) sits in 21st position overall at this stage.

It’s also been announced that Pascal Terry’s death was due to natural causes, according to the autopsy. The report showed that Terry’s body had shown no signs of dehydration or injury at the time of his unfortunate death.