Ben Spies has revealed he hopes to get a crack at MotoGP in 2010 with Tech 3 Yamaha.

MotoGP
Rumours are quickly spreading throughout Europe that the Kawasaki Racing Team will remain in MotoGP this season, reversing their speculated decision to pull out of motorcycle racing’s premier category.

Kawasaki management have remained tight lipped on the subject since the news broke this week, and it’s believed that Dorna has rescued the team in one way or another after Dorna chief Carmelo Ezpeleta held a crisis meeting with Kawasaki in Japan yesterday.

Sources in Europe say that Kawasaki (and the other top Japanese manufacturers) has a contract with Dorna to compete in MotoGP through the 2011 season, and if they were to pull out they would face a hefty fine – a sum that is rumoured to be almost half of the team’s current budget. 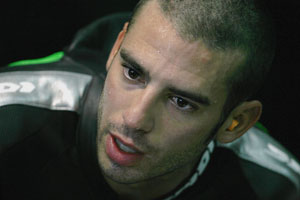 It remains to be seen whether the factory will stay as a full on effort, or if the Aspar team will in fact take over and outsource development of the engines etc. Aspar wants at least a three year commitment from Kawasaki if he is to take over the program, which I believe is fair enough.

The Aspar team is used to having competitive equipment, so it’d be extremely hard for them to run around at the back of the field in any series.

I personally hope that they get this situation sorted and Team Green gets back on track, because the story of Marco Melandri is one that would have been great to watch in 2009. Can he bounce back from his disastrous year on Ducati last year? It’s all about the confidence.

MotoGP update…
It’s now been officially confirmed by Kawasaki that they will in fact be abandoning MotoGP this year. After John Hopkins finished 16th and Anthony West 18th from 18 regular entries in the world championship last year, Kawasaki will turn its back on the series. Here’s a copy of Kawasaki’s statement:

Kawasaki Heavy Industries, Ltd. announced today that it has decided to suspend its factory MotoGP racing activities from 2009 season.

Amid quickly changing business environment, Kawasaki has been promptly taking countermeasures to cope with the situation.

As the world economy is not likely to recover in a short period due to the major impact of the financial crisis, Kawasaki decided to suspend its MotoGP racing activities from 2009 season onward and reallocate management resources more efficiently.

Kawasaki will continue racing activities using mass-produced motorcycles as well as supporting general race-oriented customers. Kawasaki would like to thank all the fans and all those who have forwarded us great help.

Mr.Yoshio Kawamura, the Managing Director of Kawasaki Motors Racing B.V. deeply appreciates the contribution and the dedication brought by staff members of the MotoGP team.

It’s unknown if the release means that there will be no Aspar team at all, or if that’s still an option at this point in time. GP One is interestingly reporting that current team manager Michael Bartholemy will actually take over the green machines, running the team as a non-factory operation, although still sending the engines back to Japan for servicing etc.

This scenario is a strange one because the team will remain with the 2008 bikes, which were clearly uncompetitive even last year, while every other manufacturer on the grid will take a massive leap forward…it could be a very long year for both Hopper and Melandri if they are to remain on the ZX-RRs. 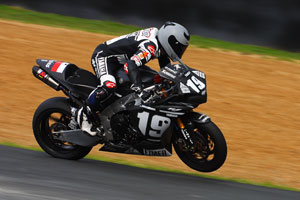 Texan Ben Spies has revealed to Motorcycle News today that he hopes to get a crack at MotoGP in 2010, eyeing the Tech 3 Yamaha outfit that currently fields James Toseland and Colin Edwards. The three times AMA Superbike Champion would most likely have to win the SBK title in his rookie season to get the GP gig, but judging by his early testing form it seems like anything is possible.

Spies was impressive in his few rides on the Rizla Suzuki last year, but the question remains if he is MotoGP material, mostly because he simply hasn’t had enough seat time to prove his worth yet. Superbike racing is another story and he’s ready to star this year already…

American Superbike
Speaking of AMA Superbikes, Yoshimura Suzuki has plucked Blake Young from the M4 Emgo Suzuki team a year before his contract with the latter team expired, and he’ll ride the American Superbike class this year. His replacement at M4 is yet to be determined.

Aaron Yates has been confirmed to be returning to Michael Jordan’s team, likely on Suzuki once again. His teammate will be Geoff May on a National Guard-sponsored bike.

Dakar Rally
Cyril Despres has finally had a stage win in this year’s Dakar, winning the shortened sixth stage of the race ahead of overall leader Marc Coma and Jordi Viladoms – in what was another good day for KTM as they swept the podium. Australian rider Dave Schwarz is in 19th after struggling to 51st position during the sixth stage.

Australian Speedway
News has filtered through that Leigh Adams won the second round of the Australian Speedway Championship at Mildura on Wednesday night, and is racing toward a record 10th national crown. Defending champion Chris Holder was second ahead of Troy Batchelor. The final round will be held at Gilman tomorrow night.

American Supercross
Round two of the 2009 AMA Supercross, an FIM World Championship, series will be held at Phoenix, Arizona, tomorrow night. The battle between Chad Reed and James Stewart is set 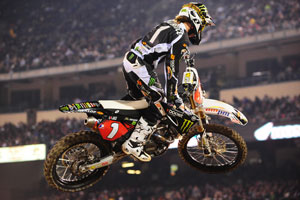 Lawrence is the One

to resume, while round one surprise winner Josh Grant will be out to maintain his series lead.

The Lites battle will be one to watch between heated rivals Jason Lawrence and Ryan Dugey, too. They dislike eachother that much that Dungey actually switched from One Industries gear to Fox this week, just to get away from J-Law.

Remember Aussie viewers that round one will be on ESPN at 8.00pm (in New South Wales) on Foxtel tonight.