Former MotoGP World Champion Casey Stoner will be present at Ducati’s Wrooom press event on the ski slopes in Italy this week. Casey watches on at the Jerez test

Former MotoGP World Champion Casey Stoner will be present at Ducati’s Wrooom press event on the ski slopes in Italy this week, but his real test is due to come next week when he gets his left wrist checked by his medical team in Italy. The team and Casey are confident that all will be okay and he’ll be fighting fit in Malaysia’s opening test of the year which starts on 5 February, although I’m sure they’ll all have a sigh of relief when he gets the all clear for certain.

News is beginning to filter through regarding the meeting between Dorna and the manufacturers in Japan yesterday and at this point in time, no news on Kawasaki’s departure from the premier class is better than confirmation that they’ll be out, so let’s hope that they work something out and commit to the series – which is looking more likely than a week ago.

Also on the agenda was a plan to enforce longer engine life for this year, as well as limit testing after the races as teams have done after almost every race in the past few years. Next year is when we will see the big changes implemented, with carbon brakes expected to be banned, among other things. Could there also be a rider salary cap in the works?

One thing is for sure, Dorna and the FIM need to find a way to reduce costs and make the series viable in the long term for each and every manufacturer and team. Thankfully it looks like they are well on their way to doing this.

British Superbikes
The British Superbike Championship may have lost its top four riders from last season to World Superbike and Supersport, but this year’s championship chase is going to be a tight one. Honda’s official HM Plant team will have Australians Josh Brookes and Glen Richards, and both will be formidable opponents for all of the established BSB stars.

One team I’m particularly looking forward to watching progress is the reigning champion Airwaves squad, which has changed from Ducati equipment to Yamaha’s all-new YZF-R1. Riders Leon Camier and James Ellison will put up a good fight, and will be trying hard to fill the boots of new champion Shane Byrne.

Add in the Suzuki (without Rizla sponsorship) of ex-MotoGP rider Sylvain Guintoli, as well as the Kawasakis of Julian Da Costa and Simon Andrews, and we are in for a good show. Don’t forget the privately run teams, including Jason O’Halloran’s SMT Honda outfit and Chris Walker’s Motorpoint/Henderson Yamaha team. The Hydrex Honda team with Karl Harris and Stuart Easton will be competitive, too. 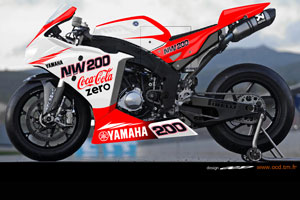 NW200 has switched to Yamaha in BSB

Michael Rutter and his Northwest 200 sponsorship are following in Airwaves’ footsteps and switching from Ducati to Yamaha (albeit with Rob Mac’s team), with news coming through today that Coca-Cola Zero will be the lead sponsor of the team – cool! David Johnson and the Maxxis Branson team are also switching to Yamaha after a year with Honda.

The season starts at Brands Hatch Indy on 10-13 April.

Dakar Rally
French rider Pascal Terry passed away in stage five of the Dakar Rally in South America, although the cause of death is unknown at this time. The 49-year-old reportedly ran out of fuel on his Yamaha and informed race control, but said that he had gotten some from another competitor. There was apparently a miscommunication between the organisers and a delay when he signalled for help. He was later found under a tree, 15 metres from his motorcycle, with both water and food by his side.

The stage was won by American Jonah Street on his KTM. Leading the event overall is still Spaniard Marc Coma, who has been leading since the opening stage.