MotoGP
Kawasaki’s highly speculated and anticipated announcement regarding its closure of its factory MotoGP team for 2009 never came yesterday as originally expected, although it’s still a certainty in many people’s minds that the team will in fact close shop this year.

Both John Hopkins and Marco Melandri have been shopping around for rides during the last few weeks, feverishly searching to ensure their futures in the premier class. I’d say the reason for Kawasaki’s non-announcement yesterday is due to a meeting that is scheduled in Japan tomorrow between the MSMA (Motorcycle Sport Manufacturers Association) and Dorna, among other key players in the industry.

It’s believed that Dorna is looking for commitment from Suzuki to the series, and I would suggest that the team is a pretty safe bet to grid up this year considering their Rizla sponsorship.

British MCN is reporting that teams don’t believe a reduced calendar will help the series to reduce costs, so it’s likely that 18 rounds will stay in years to come. One thing that is for certain is that there will be cost-cutting exercises put in place to try to keep costs down.

That same magazine has also dismissed rumours that Hopkins will be replacing Colin Edwards at Tech 3 Yamaha, or that Melandri will be on another satellite Honda in any of the teams that I mentioned yesterday. We shall see, because sometimes money talks. 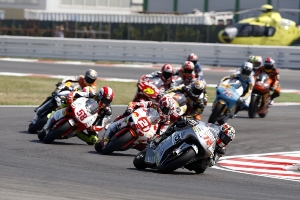 While the grids for the 250cc Grand Prix class are shrinking each year, the newly announced 600cc four-stroke Moto2 category could boost participation if the price is right and costs aren’t too high. Hopefully the class will be cheaper than the current two-strokes in the 250s, and the production-based engines should help that cause.

The engines will run a maximum of four cylinders and revs will be restricted to 16,000rpm for four-cylinder engines, 15,500rpm for three-cylinders, and 15,000rpm for twin-cylinders — essentially limiting power by capping the rev limit on the engines.

There will be a controlled Engine Control Unit (ECU) which will be supplied by the series organisers, a rule that is speculated to also be implemented in the premier MotoGP class in years to come. No other electronics will be on the bike apart from the supplied ECU, data logger, and fuel injection system.

Gearboxes will be the usual six speed, although only three ratio choices per gear will be permitted during the season.

An engine claiming rule is the big news, with teams able to purchase another team’s engine for 20,000 Euros ($AUD40,000.00). Only one bike can be used per rider for each weekend, with just two engines permitted per round. The penalty for refusing to sell the engine will be disqualification from that particular round of the series.

The chassis of the bikes will be required to be prototype, purposely built for grand prix racing just like the current 250GP bikes. The weight limit for the bikes will be 135kg, which is 13kg less than the 800cc MotoGP machines.

It’s also been revealed that the all-new 600cc Grand Prix Moto2 machines could make an early debut in the world championship, with European sources pointing toward an introduction in 2010 — one year earlier than originally planned.

It is expected that the four-stroke 600s will be phased in to race alongside the current 250cc two-strokes in 2010, with the pair competing alongside each other for a season before the 250s will be banned completely the following year.

The MotoGP class went through the same process when the 990cc four-strokes were introduced alongside the 500cc two-strokes in 2002, before the class switched to four-strokes fulltime the following season.

Concerns over the participation level from the current 250cc manufacturers is the reason that the early 600GP introduction could happen, with KTM already pulling the pin on its factory 250cc team due to the class being axed in just two years.

A decision will be made this year some time, with a Moto2 class debuting in the Spanish domestic series next year as a test for the new class to see how the four-strokes will stack up against the current two-strokes.

It’s expected that some of the satellite MotoGP teams will run Moto2 development teams to nurture new talent through the ranks. 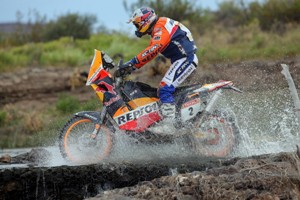 Repsol KTM’s Marc Coma continues to lead the Dakar Rally after winning stage three. The Spaniard has stretched his lead out to 39 minutes and 11 seconds, which is a comfortable margin even though it’s still very early days in the rally.

Yamaha rider David Fretigne is now in second, a few minutes ahead of Paul Ullevalseter. There are five KTMs in the top six at this point. Australian Dave Schwarz currently sits 12th overall.

AMA Supercross
Josh Grant’s victory in the opening round of AMA Supercross, an FIM World Championship, must be setting in by now and he’s the man of the moment in the USA this week. The 22-year-old has made the cover of this week’s Cycle News and also has a refreshing interview over at Racer X Online here.

Look for Chad Reed and James Stewart’s titanic battle for the championship to resume this weekend in Phoenix, but don’t count Grant out to be battling for at least the podium all season long. Ryan Villopoto will also be strong in his second Supercross class race.

Maddo’s Madness
One thing I forgot to mention yesterday was Robbie Maddison’s insane jump on New Year’s Eve, where he jumped on top of the Arc de Triomphe at the Paris hotel in Las Vegas. The jump was over 30 metres in the air, and what did Maddo do after he jumped up? Well he jumped straight back off of course!

Check out this cool interview with Maddo from a Vegas-based website here, which also features the video of the jump.