Welcome to the inaugural Racing Insider, where you can check out daily updates of news and results from various races all around the world. JGR on the podium

Welcome to the inaugural Racing Insider on Moto Online, where you can check out daily updates of news and results from various races all around the world. Introduced to give an insider’s perspective on the world of motorcycle racing (including both road and off-road, international and domestic), get the scoop on what’s happening in the two-wheel world that we all live for.

Here’s a brief rundown of the series that we will be covering from around the globe:

All of these series (plus more) will be covered in the Racing Insider section on a regular basis, offering the most insightful look into the sport – all separated into their own specific sections as news and event details filter through.

The 2009 MotoGP World Championship is set to be one of the most exciting seasons on record as Casey Stoner tries to regain his crown from Valentino Rossi, but all eyes are on the effects of the global economic crisis at this point.

Kawasaki’s factory participation is in doubt and it’s expected that KHI (Kawasaki Heavy Industries) will release a statement today, but sources suggest that team personnel were given the news that their services will not be required right before Christmas. 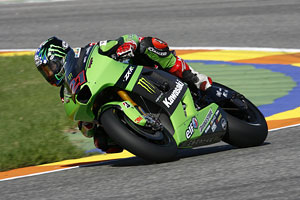 Hopper is out of a ride

It seems Kawasaki bosses in Japan were getting tired of spending a reported $40-million per year only to score mediocre results, leaving riders John Hopkins and Marco Melandri scrambling for rides at this late stage of the off-season.

One thing that may happen is that 125 and 250 Grand Prix team owner Jorge “Aspar” Martinez could take over the running of the team with Dorna’s support, although this may just be a short term solution if Kawasaki isn’t committed to the series.

This would be to ensure the series comes in above the FIM minimum of 18 bikes, because without the Kawasakis there would be just 17 bikes on the grid this year.

Rumours from Europe also have Melandri joining one of the Honda satellite teams (either Gresini, Team Scot, or LCR), although that is yet to be confirmed. Other rumours have Hopkins rejoining Suzuki on a Monster Energy-backed satellite GSV-R.

Another team that is feeling the pressures of the economy is the Ducati Alice squad, which has apparently lost its Alice sponsorship and will be reduced to a one rider team.

Former 250GP star Mika Kallio will be the rider who stays, while ex-Ducati Corse test rider Niccolo Canepa is likely to join Sete Gibernau in the Onde 2000 team. It’s also been suggested that Canepa could remain in his original position, albeit with Onde 2000 sponsorship.

Ducati is yet to confirm or deny the news as European press speculates about the building rumours.

Whatever the case may be, MotoGP organisers need to quickly look at ways to reduce costs and help the teams in these difficult times. 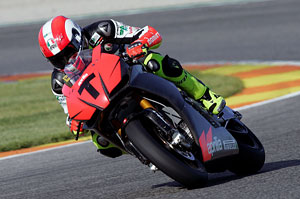 One of the most exciting prospects of this year’s new World Superbike season is that dominant Aussie Troy Bayliss is retired and a new king will be crowned. Mix in the new teams from Aprilia and BMW, plus some new riders in the ranks and it’s going to be all out war for the title.

One man to watch at the opening two rounds will be reigning 250GP World Champion Marco Simoncelli, who is all but confirmed to be joining Shinya Nakano and Max Biaggi on the new RSV4 at the Phillip Island and Qatar rounds of the series.

Simoncelli’s good friend Valentino Rossi may also be a starter on a factory YZF-R1 if reports from December are to be believed, but he wants to challenge Bayliss. The Taree Terror has reportedly asked for around $2-million if they want him to show, telling British MCN that he has stopped training and is comfortable in retirement.

Yamaha MotoGP boss has been quoted as saying they will prepare two R1’s for Vale if necessary, and it’s predicted that if the battle is to happen it will take place at Qatar’s second round of the series.

Word from the USA today is that basketball legend Magic Johnson will be starting a team in 2009, joining Michael Jordan on the AMA Superbike tour. Bikes or riders aren’t confirmed yet, although it’s rumoured that Magic is in talks with several manufacturers for the season.

Two times world champion Warwick Nowland has confirmed overnight that he will be back in the World Endurance Championship this year. His team is yet to be announced.

All eyes were on Anaheim’s Angel Stadium in California on Saturday night, 3 January, with Chad Reed kicking off his Monster Energy AMA Supercross, an FIM World Championship, title defence in his first outing with the number one plate on his new Rockstar Makita Suzuki.

In a surprise result, Joe Gibbs Racing Yamaha rider Josh Grant won the main event on debut, taking advantage of a clash in the whoops between Reed and arch rival James Stewart – who took Reed’s place on the San Manuel L&M Yamaha team.

Stewart reportedly missed a gear, forcing Reed to hit him from behind. Reed remounted to finish third behind Grant and Honda’s Andrew Short. Meanwhile, Stewart couldn’t get his YZ-F450 started and was scored in 19th position for the night.

Daniel McCoy made his U.S. debut for Moto Concepts Honda, finishing fifth in the LCQ and just falling short of making the final. Troy Carroll also made a guest appearance on his Cool Air Kawasaki, but he also failed to make it past the LCQ.

Reed’s teammate Michael Byrne had to sit out the event after suffering a broken wrist in December. He should be back by round three or four, I’d guess.

The opening round of the West Coast regional Lites title was won by Monster Energy/Pro Circuit Kawasaki’s Jake Weimer ahead of teammate Ryan Morias and series favourite Ryan Dungey. Aussie Dan Reardon scored the holeshot but a crash forced him to finish 19th for the night.

Former MotoGP World Champion Nicky Hayden (himself a top motocross rider in his own right) was even in attendance on the night.

The next round of the series will be at Phoenix, Arizona, this Saturday night on 10 January.

The opening round of the 2009 Australian Speedway Championship was run and won at Newcastle, New South Wales, on 2 January. The race was won by World SGP rider, and nine times Aussie champ, Leigh Adams ahead of Roy Schlein and defending champ Chris Holder.

Also underway this week was the Dakar Rally, which has moved from the African continent over to South America. The event started at Buenos Aries in Argentina, and will run over 15 stages – 9,574 kilometres. The event started on 3 January and will wrap up on 18 January in Chile.

Spaniard Marc Coma is leading the event on his Repsol KTM after the opening two stages, with Frans Verhoeven second and David Fretigne third.